My friend Klaus Janke sent me this link to a Mark Knopfler concert in Italy.

At around 50 minutes, Mark plays my MS Model on Matchstick Man. It looks wonderful. And he gives it a little kiss.

Guitarist, collector and friend Massimo Raccosta, with his fiancé Francesca, visited last autumn. As well as visiting the Roman Wall built by his ancestors nearly 2000 years ago (and experiencing and enjoying weather conditions they hated), Massimo had the idea of a guitar optimised for use with a pickup. It was to be called the Verona model, where Massimo, originally from Rome, now lives.

This wasn’t easy, particularly because my existing models already work so well with my preferred Highlander Pickups.

We talked about this over a meal, and later by email, and came up with a very slim bodied version of my Steinbeck model. Unusually, it is deeper at the heel than at the tail.

Three months on, it has opened into a truly surprising and wonderful guitar. Massimo will collect it later this summer; in the meantime I play it every day. A second Verona model is now built and being lacquered. 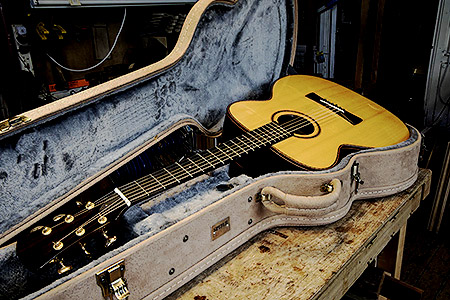 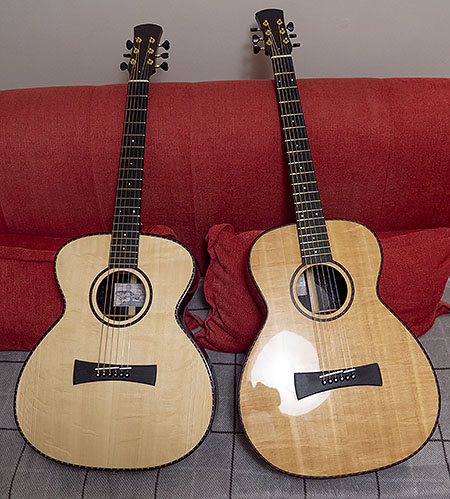 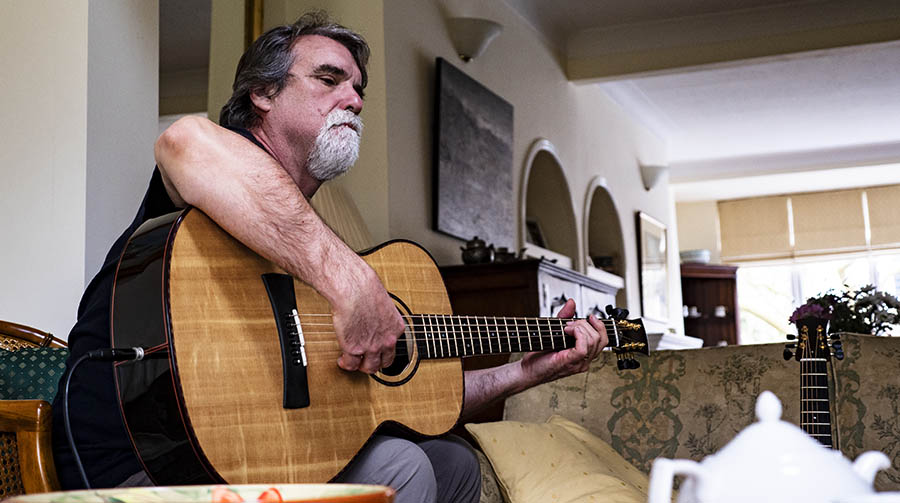 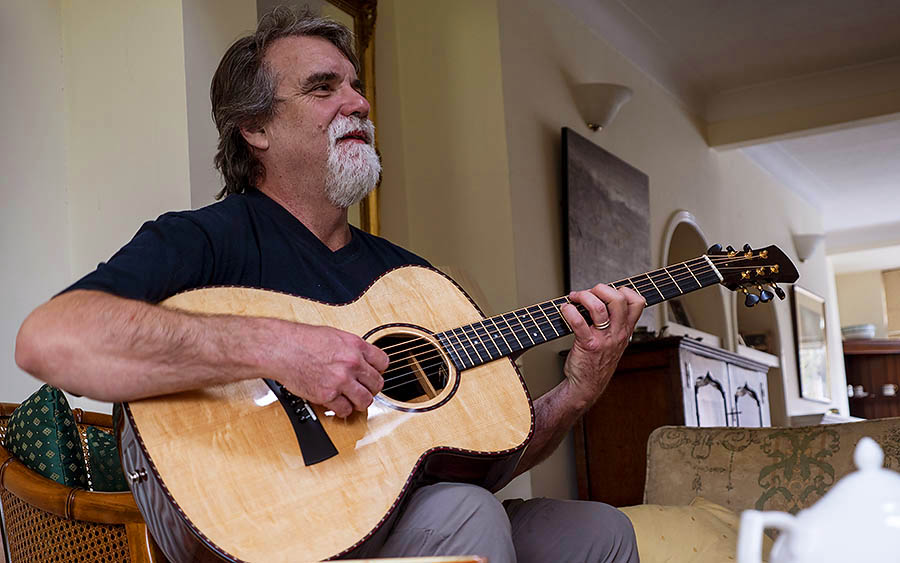 Yesterday Joseph Sobol collected his figured Sitka spruce and African Blackwood 12 string bouzouki. This has been under discussion and construction for just about two years now. Joseph has previously had me build at least three 12 string bouzoukis (I’m beginning to lose count).

For his two previous instruments, Joseph specified mahogany and Koa back and sides. This one has African Blackwood back and sides, along with a figured Sitka soundboard, as used on my Steinbeck guitars. And after playing it a while, when asked how he felt about it Joseph replied ‘this is the last’.

He thought it looked and sounded great, and so did I. Being so newly strung, we know it will open out in the months and years to come.

Today I received this email from him:

Dear Stefan— this new instrument is astonishing. By the time we got to York it had already opened up. You just have to touch it and it rings out like a choir and organ. Notes just leap off the board. Big day here in cittern world. Thank you for going out on the field one more time to make this magical thing. 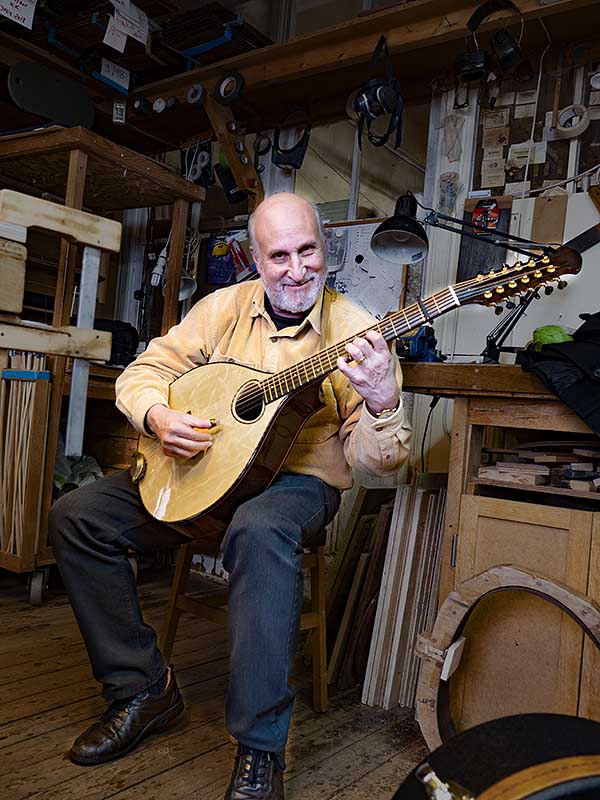 Here is the body, bound with black Rocklite and red/gold/green purfling. It is now ready for me to fit the neck, though it will be a little while before I can do this, I have other projects to complete first.

You can see here that because the top and back are curved (the back more so), the sides are narrowest at the widest part of the lower bout.

You can also see the greater depth at the neck end; this will give the heel more leverage and make sure the neck is stable. 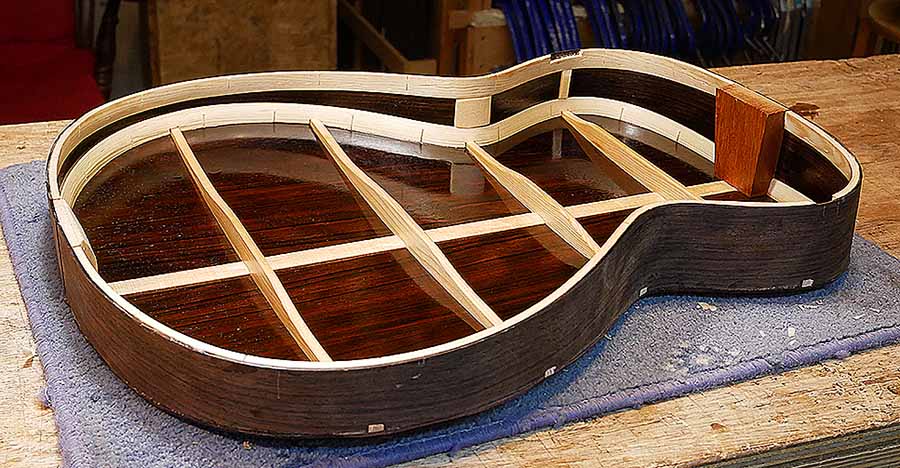 I have already built the figured Sitka Spruce soundboard, complete with braces, so now I prepare the back and sides to receive it.

After trimming the excess back wood from around the lower edge of the sides, the tops of the sides are scribed and trimmed to receive the top.  Then I fit the top lining and notch the lining on either side to to receive the brace above the soundhole.  I check the fit of the top to the sides plus linings, adjusting where necessary; then lacquer the inside of the body.

The back brace ends showing through the sides will be routed away with the binding channel and hidden by the binding.

Now it is ready for me to glue the soundboard in place.

And here is the soundboard in place, trimmed to match the sides and coated with shellac lacquer.  This ensures wood is not pulled from the grain when the binding tape is removed, and will be scraped off later. 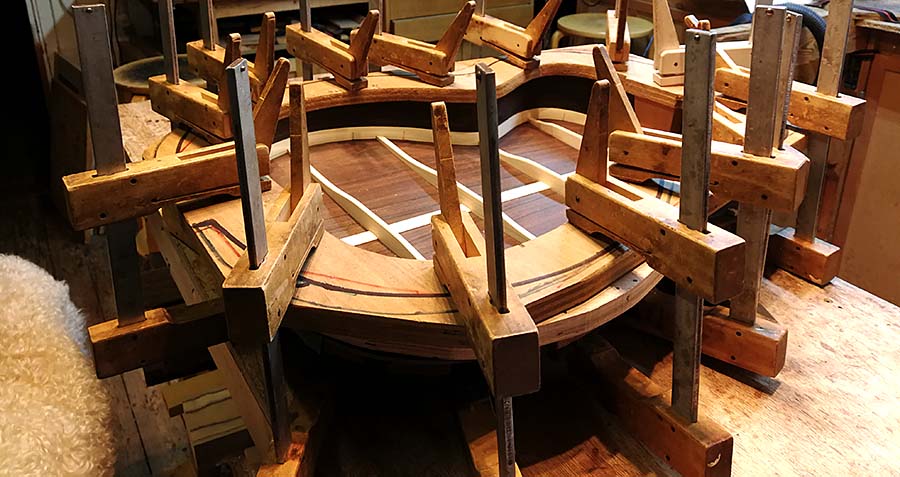 Here the back is clamped (using state of the arc clamps) and glued in place, having been turned over for cleaning up of the join.

During his recent visit (described below), Massimo Raccosta and I discussed building a very slim guitar optimised for use with a pickup.  He showed photos of a very slim classical guitar made by Hauser, though this went further than just having a fitted pickup.  In the back of the guitar was a removable panel giving access to not only the pickup but also a tiny amplifier and loudspeaker.

Not having heard this in action, I can’t give an opinion as to how it sounds.  But in any case, this isn’t the concept we settled on.

To start with, I prepared sides from Malaysian Blackwood, which works so well on my Steinbeck guitars.  But I reduced the depth drastically.  The sides are shallower than standard at the neck, but not too much so as body rigidity here provides stability for the neck.  But towards the tail the sides are much shallower. 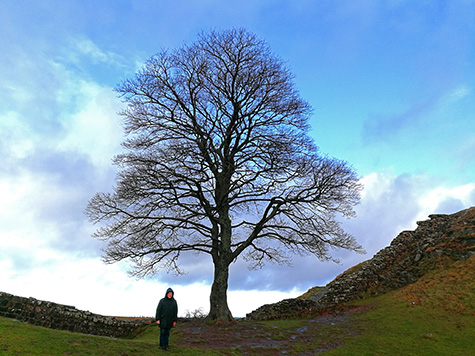