I have built many D guitars since building my first in 2004.  This first was based on my Model 1 redesigned as a 12 fret to the body standard guitar with two extra frets added to the nut.  So giving a long scale 14 fret to the body guitar tuned a tone lower than standard.

Fitting a capo to the second fret turns it into a standard guitar; standard pitch with standard strings at standard tension, with 12 frets remaining to the body. It’s a truly versatile guitar.

In 2013 Maurice Condie asked me to build him a D guitar on a Model 2 body, as this was already a 12 fret to the body model. This was an excellent suggestion, and my current D guitars are built to this design.

In 2018 Darrell Scott was visiting the UK and asked me if I had anything interesting to show him.  I showed him a figured Sitka and African Blackwood Model 2D, thinking this would amuse but not seriously interest him. He fell in love with it instantly and took it away with him.

Earlier this year I wanted to hear how a slightly shallower D guitar would sound. I built it with African Blackwood back and sides and a German spruce soundboard.  This has turned out to be my favourite; I’ve hung on to it and play it every day. Yes, the nut is a long way away, and as I’m short with a limited reach it’s a bit of a stretch for me.  But I’m used to it now and it’s worth it: a wonderful rich dark sound, clear and strong in both treble and bass.

I love it so much that while I don’t have a commission for one, I’ve just finished an Anniversary version, with dark Brazilian rosewood back and sides and an aged German spruce soundboard. It’s currently in the spray-booth; I’m impatient to have it back and play it. Here are a couple of photos showing it ready for lacquer. 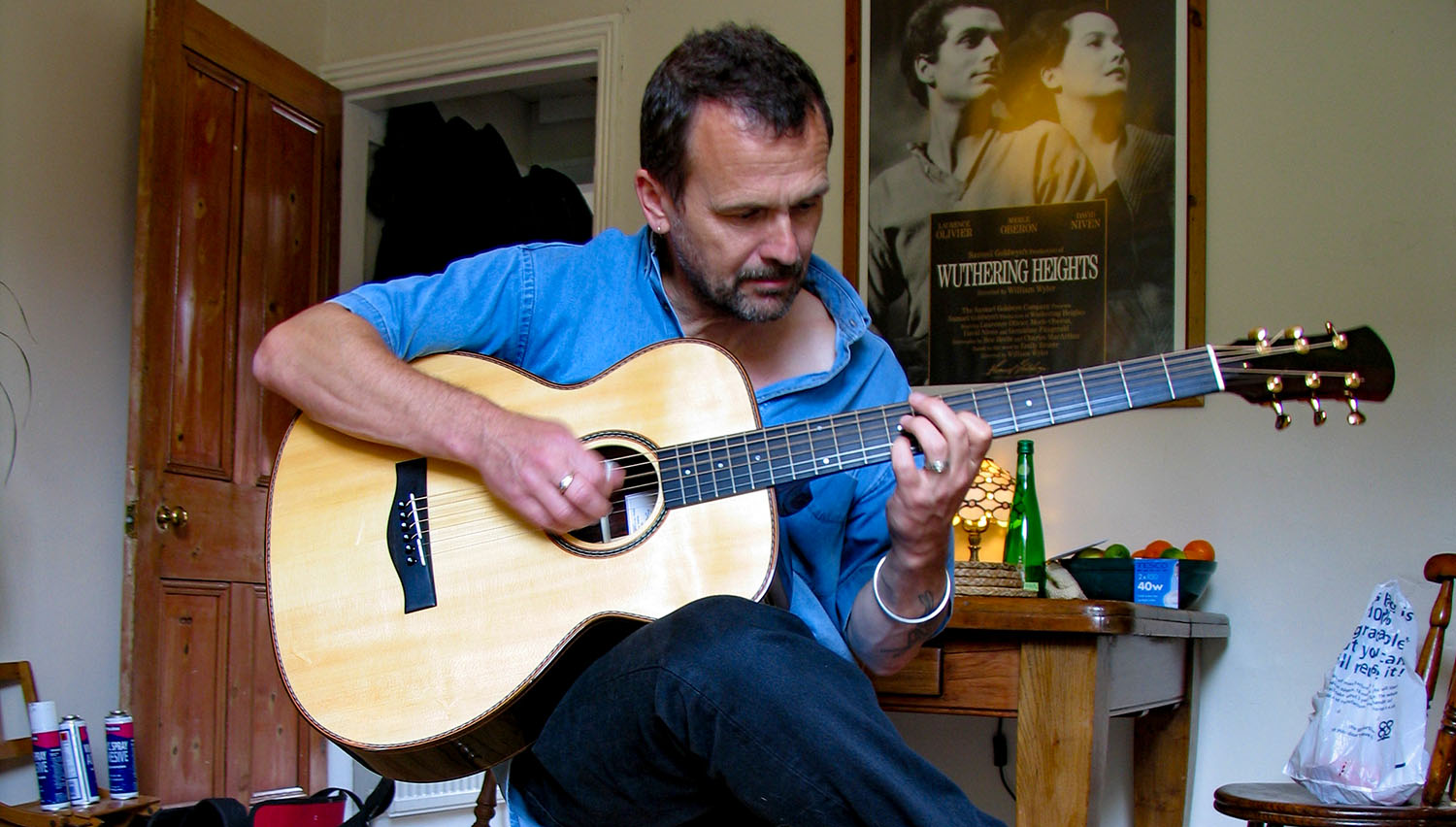 Maurice Condie with his brainchild, the first Model 2D in 2013. He says now ‘It is still, in my opinion, the best guitar I have ever played (once you get used to the long stretches)’. 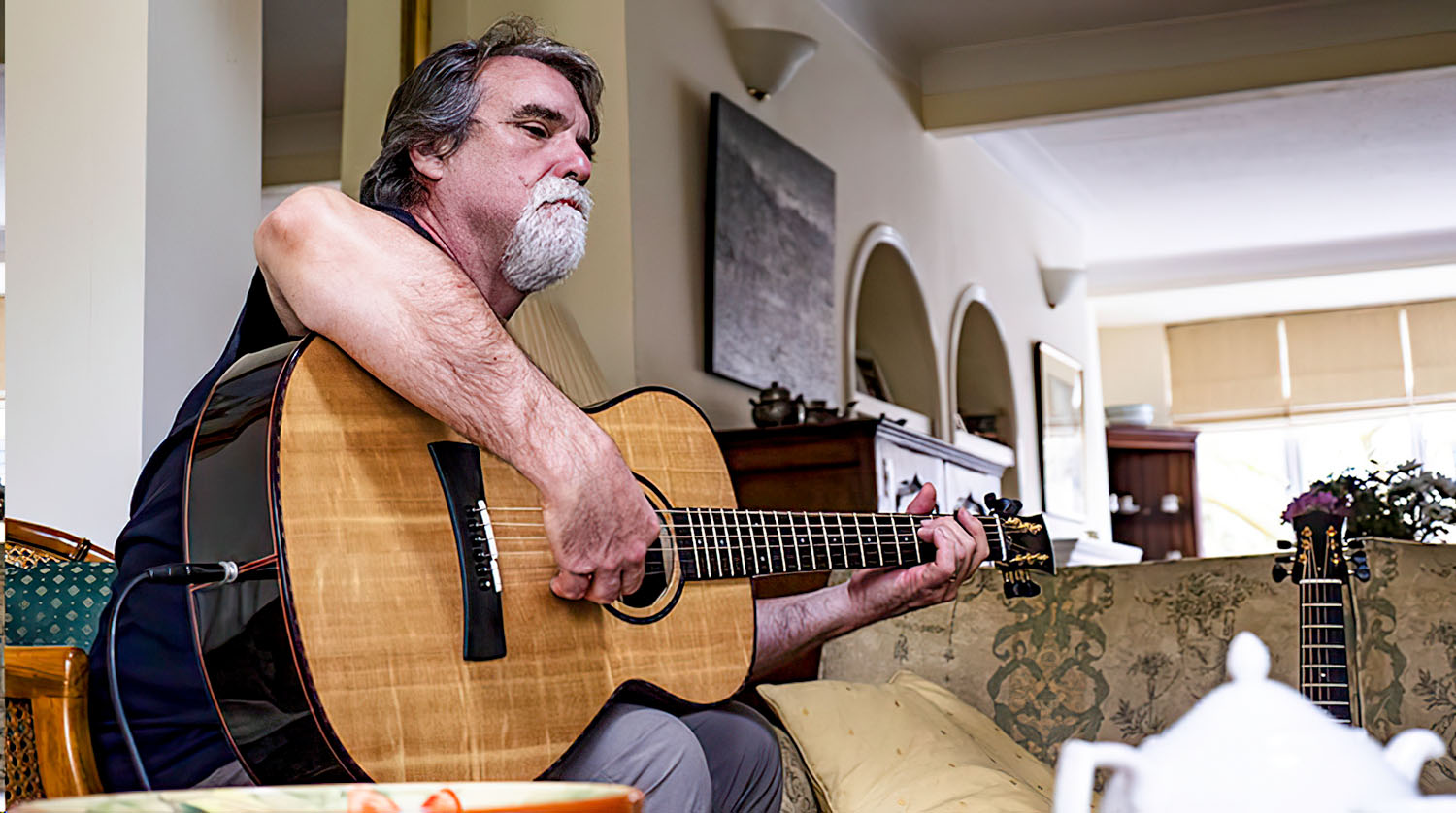 Here the bridge is just resting in place and will be attached after the guitar has been lacquered.  The soundboard comes from Bavarian supplier Stefan Gleissner and is one of his special reserve stock.  Selected for their perfect grain and tone, these have been air dried for between ten and twenty years. 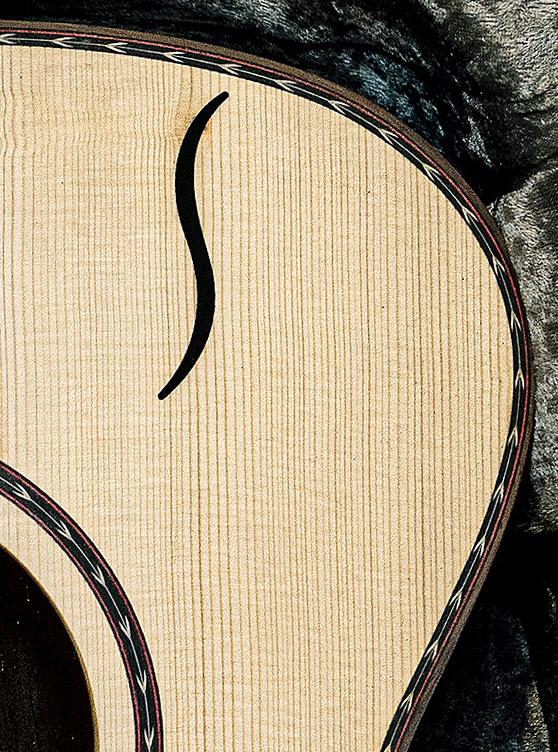 Here is my prototype Anniversary model.  Final soundboard sanding exposed a tiny dark knot, so after some head scratching I decided to inlay a half size ebony headstock logo into the soundboard to conceal it.  The dark logo in pale wood echoes the pale logo in the dark headstock wood.  So making a virtue of necessity.

Having done this, I like it a lot, so am offering it as an option on all future Anniversary guitars.

I am now taking orders for 40th Anniversary guitars, as announced in my previous post.  I will be building twelve in total, four are spoken for so I can take orders for another eight.

Anniversary guitars can be any of my current flat-top models, with options for soundboard wood, neck wood and binding/trim. All will be built with my CITES compliant Brazilian rosewood, and certification will accompany every guitar.

Please contact me for details and to discuss specifications. 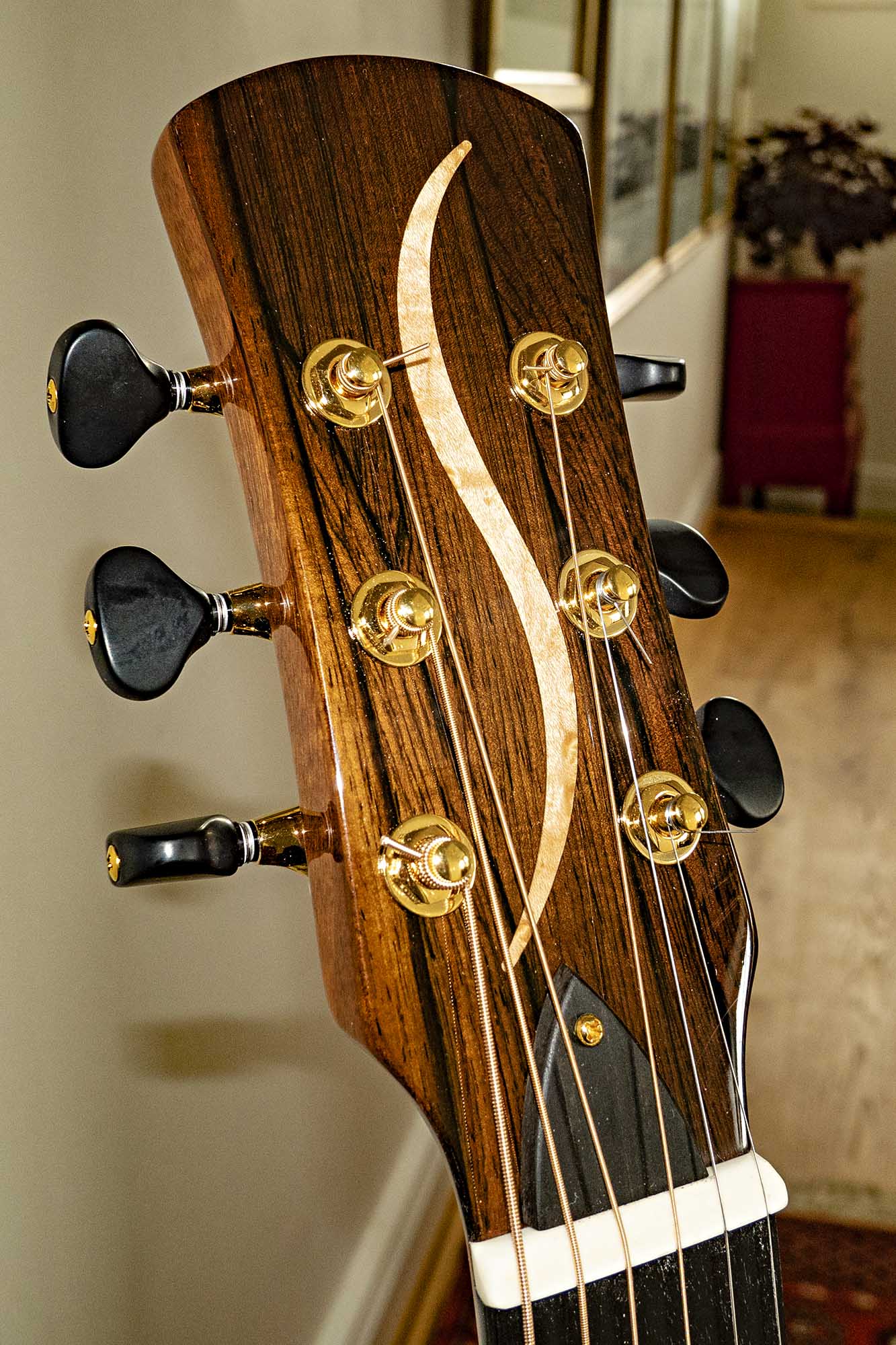 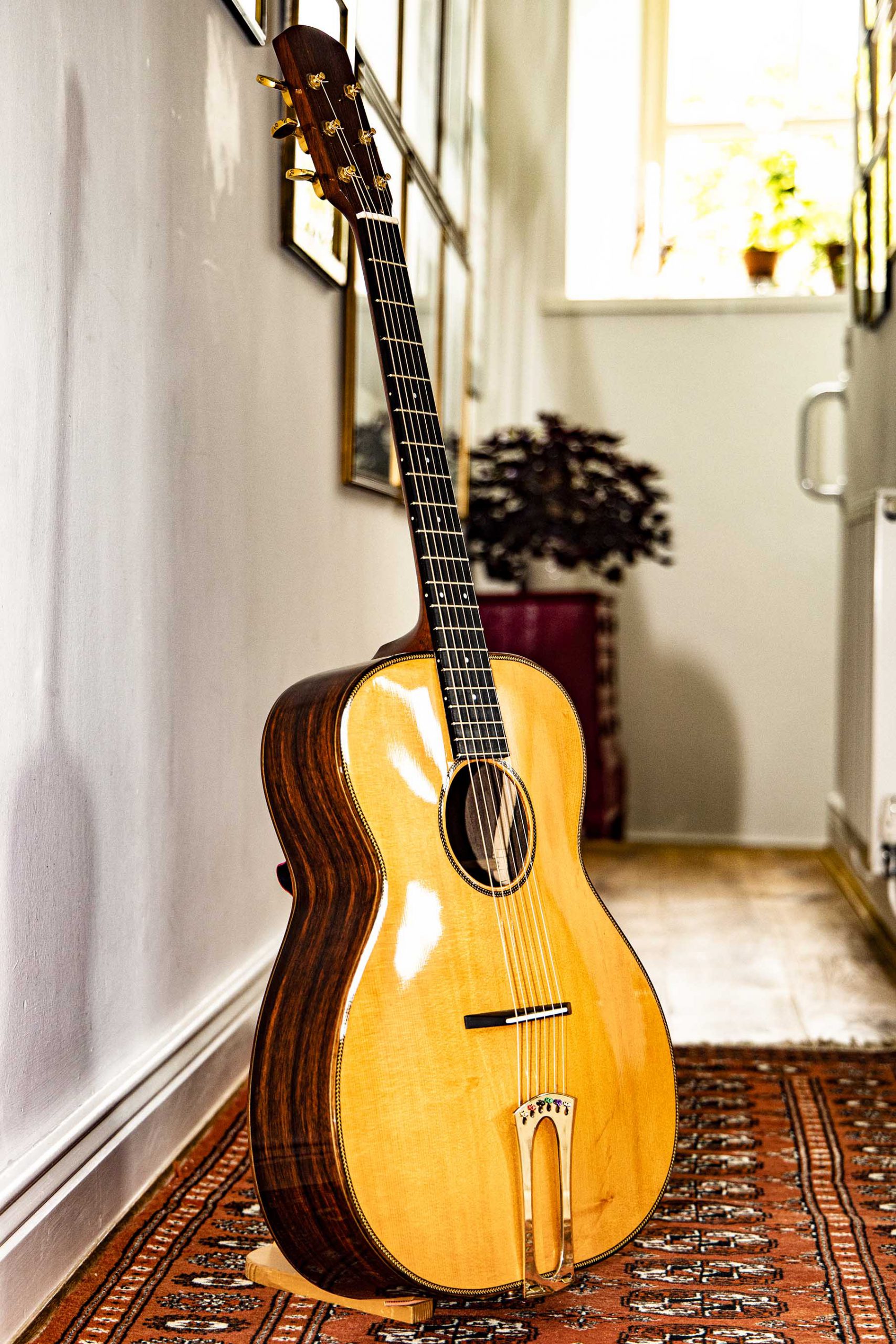 I’m now coming up to the 40th anniversary of my first guitar, an arch-top I built in the summer of 1981.
So I’ve decided to build a series of Anniversary guitars over the next two years.

These will be built to order from my personal stock of Brazilian rosewood which is now up to date with current CITES requirements.

Anniversary guitars can be any of my current models, will have a choice of soundboard and neck woods and a choice of three binding/trim combinations.  The tuners will be Gohtoh 1:21 ratio 510s, in my view the best available.

Apart from being built from selected best timber, every Anniversary model will have  my first ever headstock logo, as shown in the photo.

This is an inlay of highly figured Birdseye maple in the form of a stylised letter S, running down the headstock between the tuners.  The headstock shown is not yet lacquered, just wiped over with shellac to bring out the colours.

I originally intended to build just six guitars, but while not having publicised them, I’ve mentioned them to a few people and already had considerable interest. So I have decided to build a run of eleven Anniversary models in addition to the prototype New World already built, making a total of twelve.

Over the next two years I will concentrate on Anniversary guitars and will not be building my standard range.  I still love building and am happy that my current guitars are my best ever for build, finish and sound, but I’m at an age when I have accepted that I can’t go on forever.  And while I hope to continue after completing the Anniversary models, I will have to decide on this when the time comes.

For Sale:  I have a new left handed guitar-cittern for sale, details on my Available Now page. 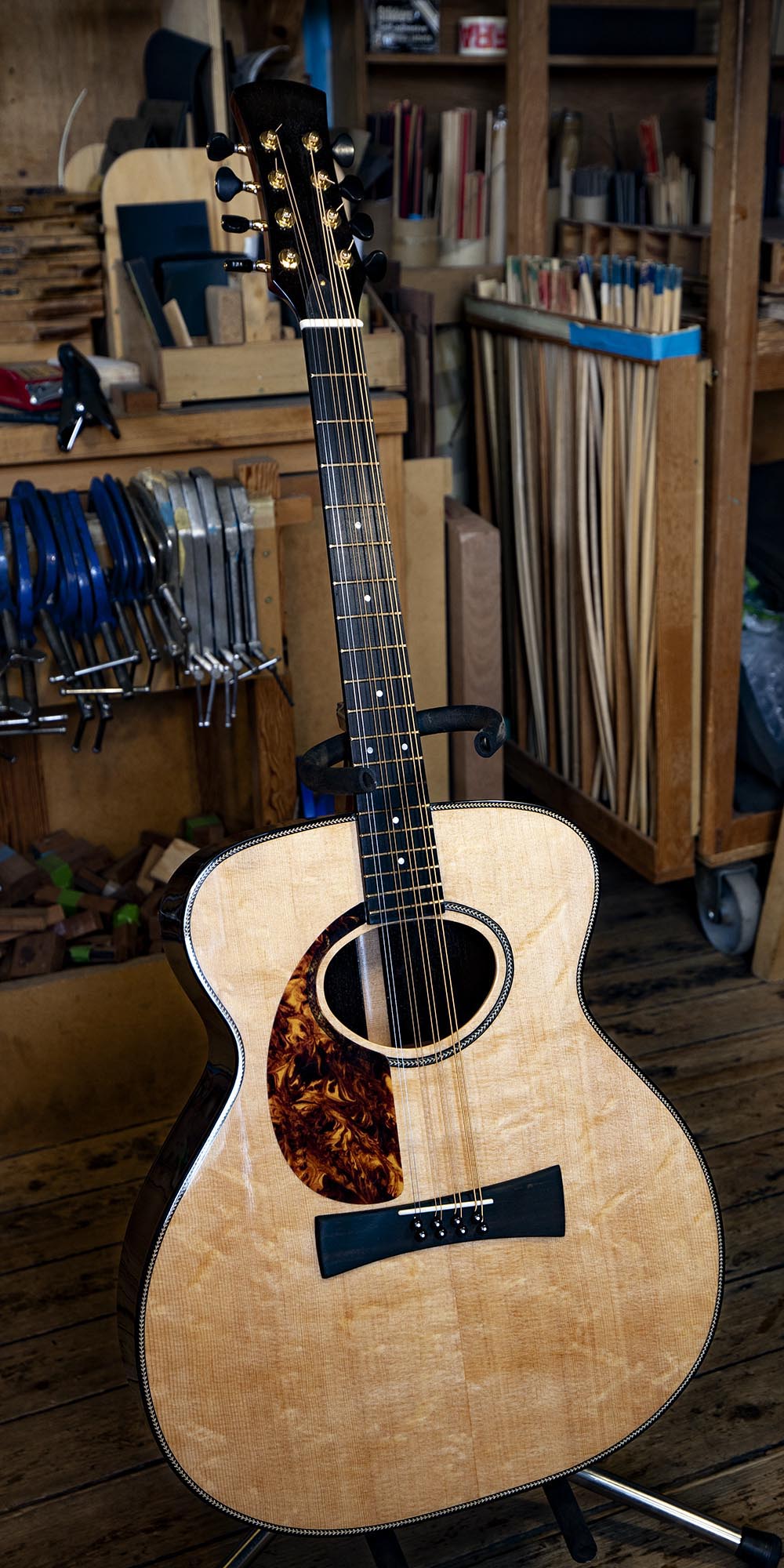 In the early 2000s I built up a stock of Brazilian rosewood, famous for building special sounding guitars. As CITES legislation changed and I didn’t keep up with it, I left it on my workshop shelves for many years.  But now I have brought it up to current CITES certification.  Having sorted it into guitar sets, it’s clear I have more than I can ever use, so am putting some up for sale.

It can be seen at     https://www.sobellguitars.com/brazilian-rosewood-for-sale/

Sorted into sets.  The 12 sets offered for sale are in the right hand stack.

My latest development guitar is now built and ready to be lacquered.

It’s my fourth Verona guitar.  It has African Blackwood three piece back and sides, but unlike the previous three, it has a German spruce rather than figured Sitka spruce soundboard.

A more significant change is modified soundboard bracing, and because I design bracing and bridge to work together, a modified bridge.  In this case the bridge is wider.  While shown in the photo in its final position, the bridge is just resting on the soundboard and will be glued in place after lacquering.

I’ve also made a cosmetic change. The binding isn’t black but is now Santos rosewood, still with red/gold/green purfling. Santos rosewood is a rich red brown, contrasting nicely with the darker African Blackwood. Lacquer will bring out its full beauty.

Both soundboard trim and rosette are my MK black and white birdsfoot.

It will be over a month, maybe longer, before I get it back from the spray-booth and can fit the bridge and string it.  A good job I have become more patient over the years. 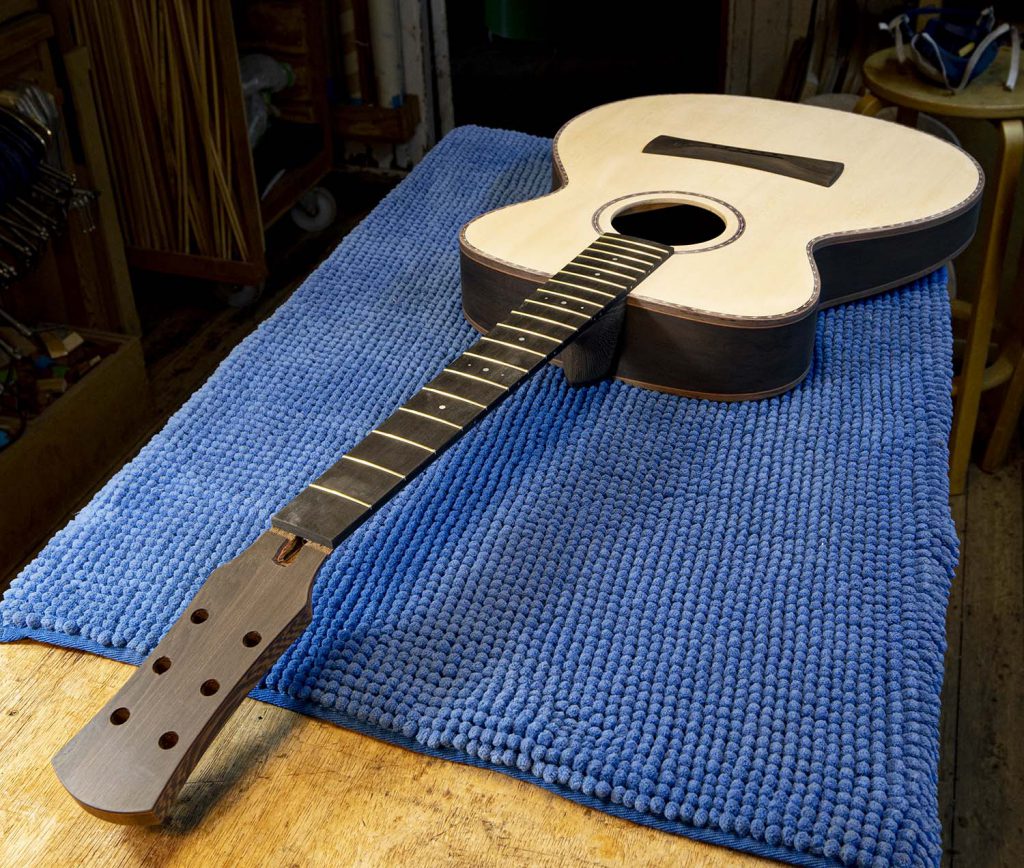 Back view, showing three piece African Blackwood back. I love the look, and there is no difference in sound as compared with a standard two piece back.

Indeed, I have built guitars with five and six piece backs, Martin Simpson’s Brazilian rosewood MS 2 model was one of these.  I was able to use lovely colourful old Brazilian scantlings, 3″ x 2″, and the guitar sounded wonderful.

There is of course a history of multi piece backs. In past centuries, when transport and shipping was not as easy as today, makers used varied woods and sizes as a matter of course.

More recently,  the Martin Guitar company introduced the three piece back D35 in 1965, so as to be able to use the narrower pieces of Brazilian rosewood they had available. It became a popular model and has stayed in their catalogue to this day. 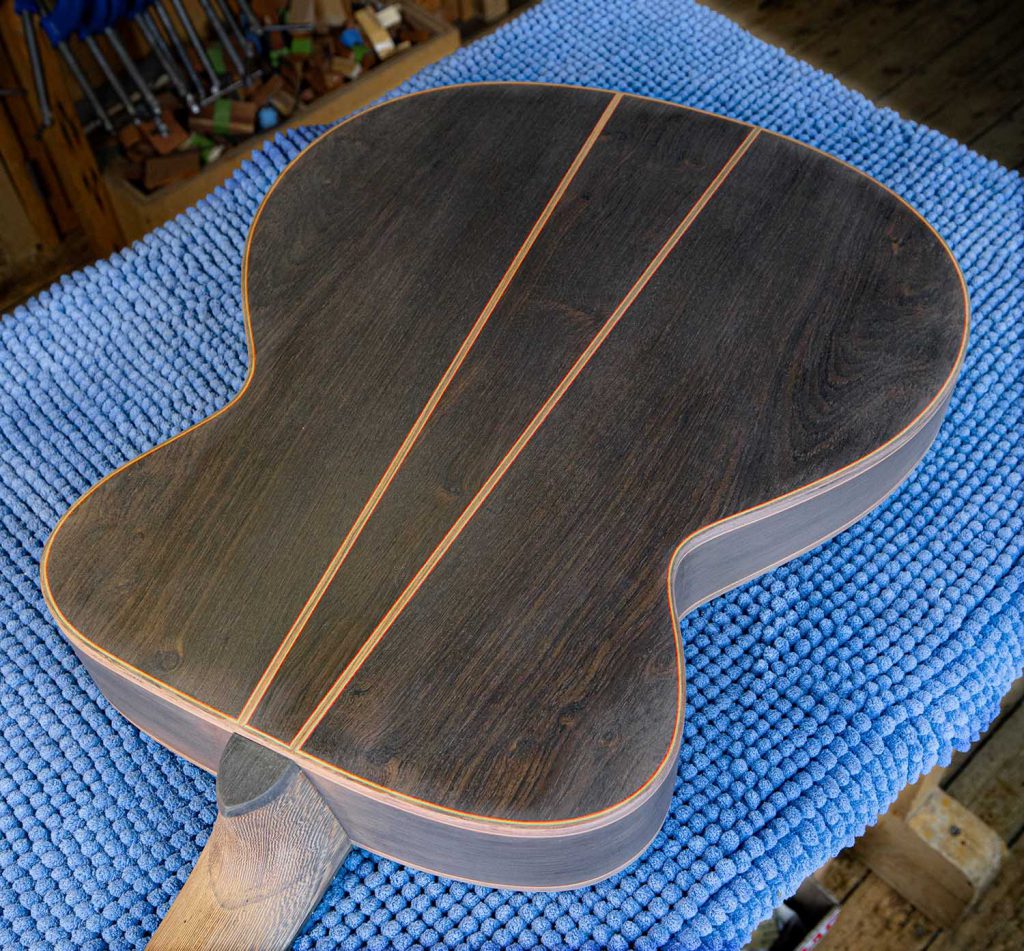 I have now put up a page about my latest Verona model guitar      https://www.sobellguitars.com/verona-guitar

This was devised with Massimo Raccosta who lives in Verona; hence the name. At first the idea seemed unlikely, but it grew on me and the Verona turned out to be a fascinating guitar.  To the point where others can sound louder and more dramatic, but this is the one I pick up first every day.

Today I went on line to find filter refills for my trusty 3M face mask. I’ve been meaning to do this for a while, but not got around to it.  Today all suppliers were out of stock.

Is this panic buying?  Or have woodworkers and others everywhere suddenly realised their filters need changing?

I find this a really good mask. I get a good fit to the face, and as well as filtering out dust, I can use superglue and acrylic lacquer and not get a hint of fumes through it.

On the subject of panic buying, a large 4X4 was recently seen completely filled with toilet rolls.  Madness.  And selfishly anti-social. 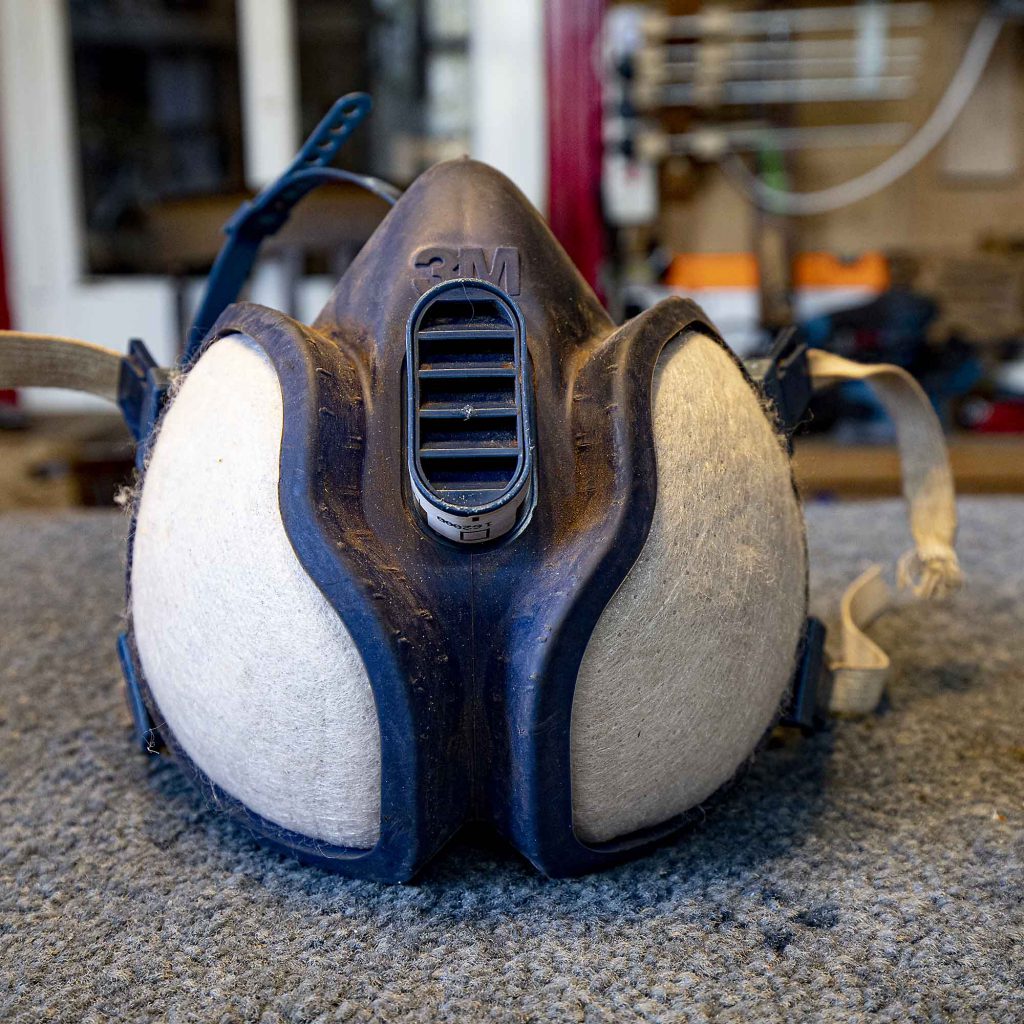 The mask in question

And not just difficult, dangerous for many. Many will be in despair as to how they will manage financially, old and medically vulnerable people are aware that catching this virus could be serious and possibly fatal, and the problems society faces will drastically affect everyone.  It’s a time for pulling together, and doing everything we can to help those around us, in particular those less fortunate than ourselves.

Liz and I are self-isolating, our kind younger neighbour will collect shopping for us.

Because I work alone, I am privileged in that I can continue working. Building guitars has been described, not without some justification, as my occupational therapy.  But I’m not accepting visitors until further notice, for obvious reasons.  However, shipping and courier companies tell me they are continuing to make deliveries, so I will be able to ship instruments out as usual.

Today I fitted back braces to the Verona model I’m building. Left is the back with reinforcement struts cut away to receive braces, right the braces are glued and clamped in the go-bar jig.  The back is placed in a mould which has the same radius as the curve I’ve shaped the braces to.

Incidentally, behind and to the right of the go-bar jig I store some of the different purflings and bindings I use. 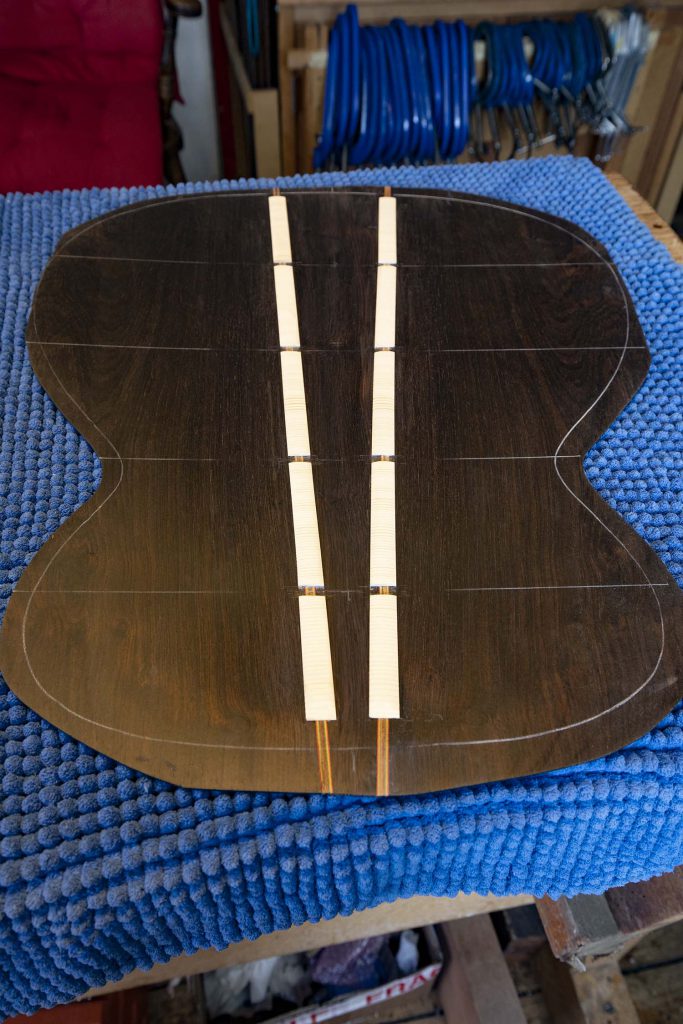 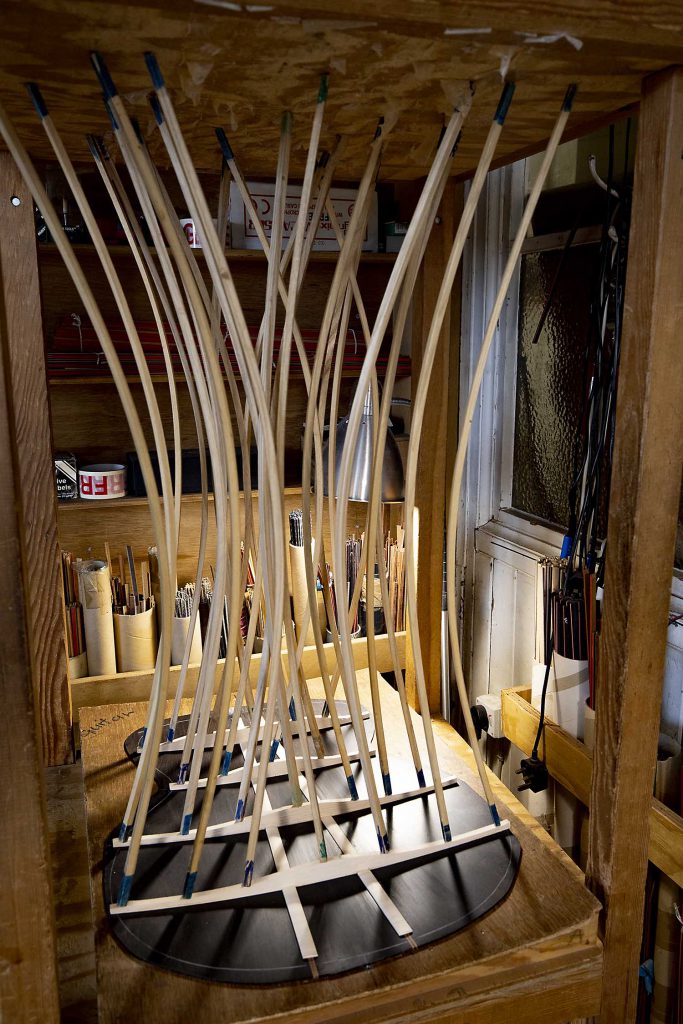