At the moment I’m working on two octave mandolins, both with European spruce soundboards and cocobolo back and sides (see later item on cocobolo). Here is an octave mandolin body with the top lining clamped to the sides while the glue dries. The top lining gives glueing area to the join between sides and soundboard. 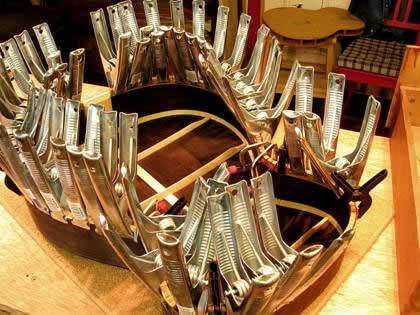 These new guitars are a little narrower and shallower (in effect a slimmed down version of my Simpson model body), are built lighter and have modified soundboard bracing. They also have their own trim, maple binding with red/white/red purfling around the back and sides, and crowsfoot with red/black around the soundboard.

The construction and dimension changes bring them closer in concept to the 000 and OM Martins from between the world wars. I’m planning to introduce this as a model in its own right, calling it my New World model. 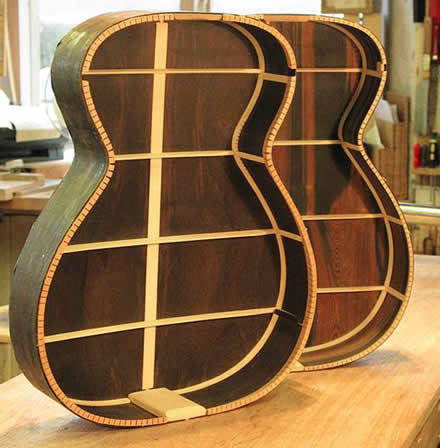 Here are the two completed backs and sides. Each has its back and sides from the same flitch, not common these days as it’s a more wasteful method of cutting rare old logs. But the effect of perfectly matching backs and sides is really good.

The next steps will be to fit the soundboards, bind the bodies, fit the necks and fingerboards, fret them and make the bridges.

I plan not to take more orders for cocobolo instruments. Cocobolo sanding dust is unpleasant, and I understand it to be toxic. I’ve know this for many years, but now feel strongly enough to stop using it. I intend to offer alternative woods for the cocobolo instruments on order, and will be in touch with customers before starting work.