Here is one of my two experimental New World guitars located in its carriage, ready for cutting the binding ledge. The carriage allows it to be run past an inverted router, which can rise and fall to allow for the curve of soundboard and back.

The cutter adjusts up and down to vary the depth of cut, and different diameter followers change the width. By adjusting width and depth of cut, I can cut appropriately sized ledges for the binding and purfling. 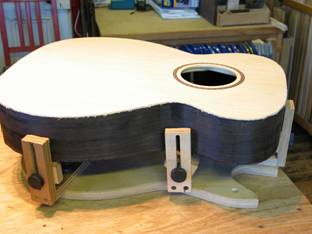 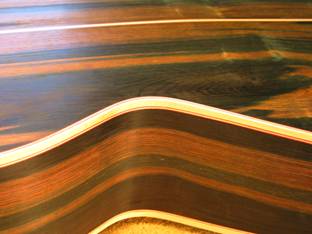 Here is the second guitar with binding and purfling fitted, scraped down and sealed. It is now ready to receive the neck.

The ledges for binding and purfling have been routed out using the system described above. The ledges are not routed where the purflings join; this area will be finished by hand and the purfling joins mitred, as on the guitars above. 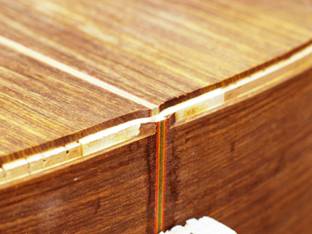 The red/gold/green purfling I’m using on these octave mandolins is made by gluing and clamping coloured wood veneers and cutting them into strips with a scalpel drawn along a straight-edge. 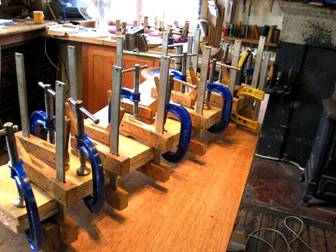 Different woods make different sounding guitars, but sometimes we can’t say one is better, just that it’s different. Comparing Adirondack (American Red) spruce with European spruce is like this.
Adirondack gives a different sound to European, so guitars using it should be designed differently to get the best from it.

Carlos Ghosn was put in charge of the Renault car company when it was struggling. He said ‘There is no problem at a car factory that great products cannot fix’.
While I don’t build cars and don’t see myself as a company, I do agree with his philosophy. I think that’s why around one in four of the instruments I build is experimental in some way.