The Dreadnought guitar originated in the US, where it was first built in 1916 by C.F. Martin for the Ditson company. It became an important part of the well established US guitar-playing tradition, used particularly in bands where its strong bass stood out backing fiddles and other solo instruments while it’s warm sound suited many song accompanists.

British interest in steel string guitars came later, during the skiffle craze of the 1950s and the following folk revival. When I first started playing guitar in the early 1960s, the Dreadnought was the standard guitar in British folk clubs. Most were cheap copies of US instruments; only occasionally did one come across a real Martin or Gibson. These were so rare in the UK as to cause considerable comment, along with awe and wonder that anyone could actually afford one. Innocent days.

I built my first Dreadnought in 1988 when singer songwriter Paul Metsers smashed his Martin D35S in a car accident and asked me to build a replacement. Because of my slightly arched soundboard I built it a little wider and a little deeper, but I retained 12 frets to the body. It was a really big guitar – Dave Wilson christened it the ‘Double Decker’ (a double decked town bus) on account of its size. 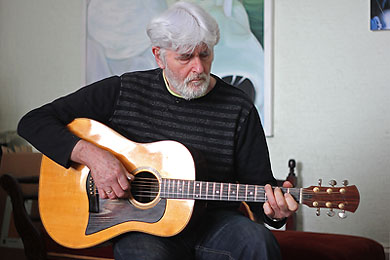 Paul Metsers with his Double Decker, now 23 years old. The guitar, that is. Paul is a big man who dwarfs most guitars. He made and fitted the solid wood scratch-plate early in the guitar’s life.
After a break, Paul is now gigging again and his original Double Decker is still his main instrument.