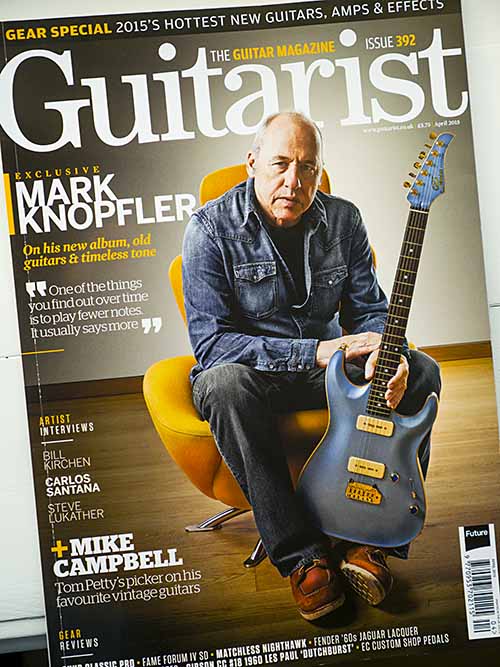 I get a couple of mentions in the Mark Knopfler interview in this month’s Guitarist magazine.  The first is in relation to finding suitable apprentices.  After saying John Monteleone couldn’t find one, he goes on to say

“And I was also asking [luthier] Stefan Sobell about that in Northumberland a couple of years back.  There was a young guy making a guitar in Stefan’s workshop, and I said, is this your apprentice? And he said ‘Oh no – he’s a perfectly nice young man.  But no, I’ve never been able to find anybody”.

Incidentally, the ‘young guy’ (very pleased to be called young) was my friend Jack Hind.  But Mark was right, and I’ve still not found anybody.

The second mention is about the guitar he bought from me.  After talking about his mid 30s Martin and a Froggy Bottom parlour guitar, he went on to say:

“…and the other one is a Stefan Sobell flat-top guitar.  It’s a beautiful guitar and you’re conscious that to be worthy of a thing like that you’ve got to play it.  So I pick that up and play it a little bit.  It’s like getting a guitar from John Monteleone or something.  You’ve got to play it in to try to bring it on, which is what I’ll try to do every now and again.  But they’re all so beautiful.”