In the Yorkshire folk clubs of the late 1960s I came across very few good guitars. When I saw Stefan Grossman play a small club near Harrogate, he had a vintage Martin the like of which I hadn’t seen before. I think now it was a Brazilian rosewood 000, probably an OM.

When he first took it out it was unlike any guitar I’d heard; I was astonished. The sound from other guitars around crept out from somewhere inside, but this seemed to hit you straight off the sound-board. It was my first experience of what new strings and a really good steel string guitar could do. 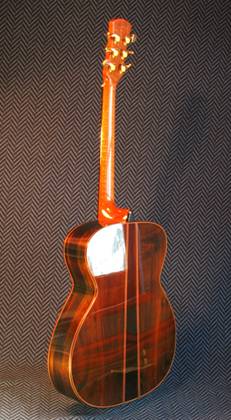 After all these years I can’t really say how I’d feel now about Stefan Grossman’s Martin. I’m sure it was a great guitar, but I’ve heard an awful lot more good guitars since, and I’d be putting it in a different context. But I can say that the moment I first strung and played this Adirondack guitar, for the first time in decades my mind went straight back to that evening in Yorkshire and the sound I heard there.

My idea in building this guitar, as mentioned in previous bulletins, was to get the classic American sound but with added presence and sustain. I think it does this, and I love it.

New ideas don’t always turn out the way you expect, however experienced you may be. A year or two ago I built an experimental soundboard braced using ideas taken from classical guitar construction, which was so successful I immediately removed and replaced it. But as often happens, finding out what doesn’t work helps you find what does, and in this case the lessons learnt led to the very different bracing system that works so well on the Martin Simpson signature model.

Cocobolo for backs and sides

Here are cocobolo sets just arrived, bound and lathed. They’ve been cut to make four piece backs so they can be fully quarter sawn; had I cut them for two piece backs, they would have been well off the quarter towards the edges.

Cocobolo is a central American rosewood. It gives a dark, clear bass with good separation right across the strings. It has some of the tonal qualities of Brazilian rosewood. Its appearance varies, this looks great. 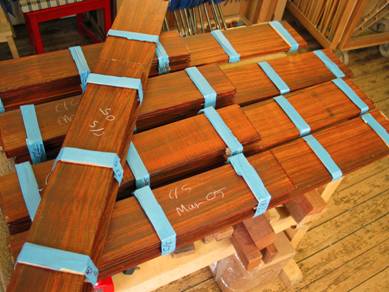 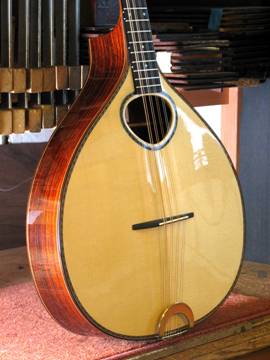 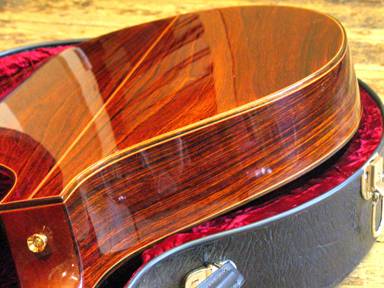