Patrick de Broux is a generous man. He was unable to attend either of my talks in aid of Whitley Chapel Village hall (see item below) but on both occasions made a £50 donation.
I announced this to the audience, and after they had applauded his generosity, pointed out that Patrick perhaps knew something they didn’t; after all, he’d paid several times the ticket price NOT to come and hear me.

Patrick recently came to me with an interesting project. He asked me to build a Cuban Tres, a small guitar bodied instrument with three pairs of strings. This instrument is a long term project and is still under construction.

He also asked me to build a small bodied mandolin with an extended neck, tuned two and a half tones lower than standard. This would tune DAEB, but a capo on the fifth fret would give mandolin tuning and scale.
This project also really interests me, and I’m now well on with it. Andy Irvine played an extended neck mandolin of mine (but with two extra frets rather than five) for many years, and Patrick had this in mind when thinking of his mandolin. 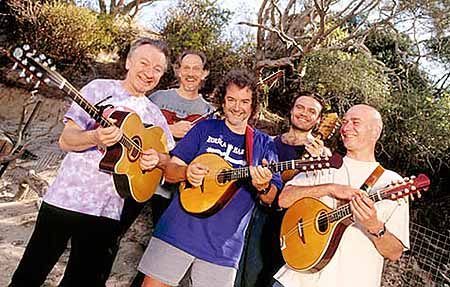 Here is Andy (centre) with his small bodied long scale mandolin, pictured with his band Mozaik. On the right is Rens van der Zalm with his standard scale large bodied version.
I would have made the back and sides from the Birds-eye maple I love so much, but Patrick asked about my scantling Brazilian rosewood. I found a pretty and very resonant piece just wide enough to make mandolin sides (without having to join two pieces together to get the width, as on scantling guitars).
This scantling would cut into enough pieces to make not just the sides, but also a multi-piece back; it’s nice to have back and sides from the same piece. I later found there was enough left over to make the headstock veneer from it as well.

In the end I felt the back looked best with a dark strip from another scantling down the centre, between two strips from the original scantling on either side. This would have meant the back having four joins, with two purfling strips, one on either side of the dark centre strip.

The two photos below show the strips arranged this way, the second with the surround blacked out to give an idea of how the wood looks in mandolin shape. 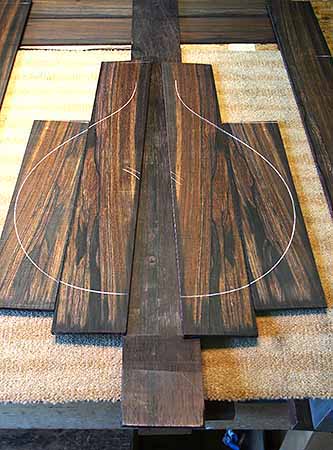 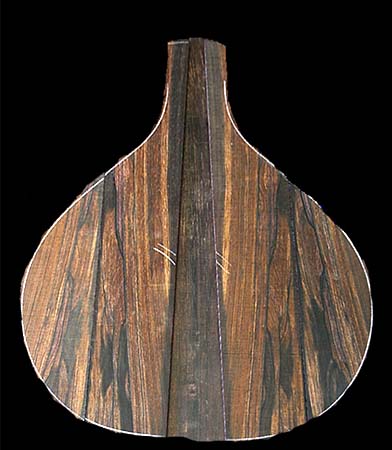 But when I sent Patrick pictures, he suggested cutting the dark piece into two with purfling in between down the centre of the back. The dark centre would then blend with dark areas on either side.

While I wasn’t keen to add an extra unnecessary join just for cosmetic reasons, it wasn’t really important so I eventually agreed. The photo right shows the back joined and sanded to thickness (with the mould resting on it to show the final shape).

Patrick’s idea worked out just as he had wanted, in that the black centre strip (now cut into two) blends perfectly with the black edges of the strips on either side. Lacquering may show up a minor change at the join, but I’m sure it won’t be obvious.

Life can be interesting and complicated; Patrick and his ideas always add interest and usually add complication.

All these joins will require re-inforcing strips on the inside. 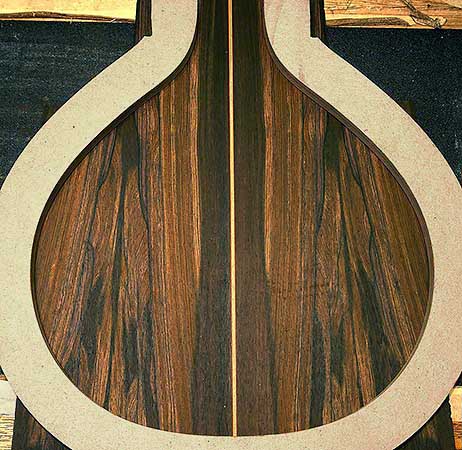