I was recently reminded of a quote from John Steinbeck’s ‘Grapes of Wrath’.  I was playing my most recent guitar (pictured), built to the same specs as Rens van der Zalm’s guitar – bearclaw Sitka top, Malaysian Blackwood back and sides and Wengé neck.

With its full dark bass and clear musical treble, it lent itself perfectly to what we British in the 60s called Clawhammer but is generally known as Travis picking.  The sound is not as smooth as my German spruce topped guitars, but strong and full of life and I love it.

I read Steinbeck’s ‘Grapes of Wrath’ nearly half a century ago, and the quote, or at least the gist of it, has stayed with me.  Steinbeck is clearly talking about Travis picking when he describes ‘the deep chords beating, beating, while the melody runs on the strings like little footsteps’. 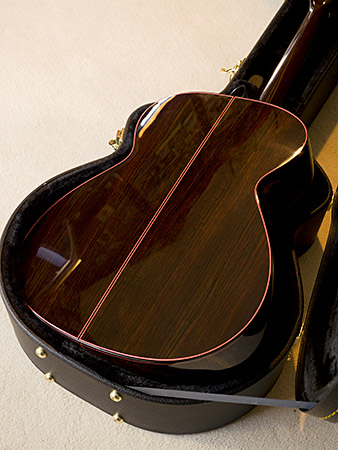 From Steinbeck’s ‘Grapes of Wrath’

And perhaps a man brought out his guitar to the front of his tent. And he sat on a box to play, and everyone in the camp moved slowly in toward him, drawn in toward him. Many men can chord a guitar, but perhaps this man was a picker. There you have something — the deep chords beating, beating, while the melody runs on the strings like little footsteps. Heavy hard fingers marching on the frets. The man played and the people moved slowly in on him until the circle was closed and tight, and then he sang “Ten-Cent Cotton and Forty-Cent Meat.” And the circle sang softly with him. And he sang “Why Do You Cut Your Hair, Girls?” And the circle sang. He wailed the song, “I’m Leaving Old Texas,” that eerie song that was sung before the Spaniards came, only the words were Indian then.

And now the group was welded to one thing, one unit, so that in the dark the eyes of the people were inward, and their minds played in other times, and their sadness was like rest, like sleep. He sang the “McAlester Blues” and then, to make up for it to the older people, he sang “Jesus Calls Me to His Side.” The children drowsed with the music and went into the tents to sleep, and the singing came into their dreams.

And after a while the man with the guitar stood up and yawned. Good night, folks, he said.

And they murmured, Good night to you.

And each wished he could pick a guitar, because it is a gracious thing