On the 21st of last month Massimo Raccosta organised a classical guitar recital in his home town of Verona.

The guitar to be played was one of the most famous in the world, being La Leona (The Lion) built by Torres in 1856. This guitar could be said to have influenced the whole course of classical guitar building and playing into the 20th and 21st centuries.

The guitarist was to be Wulfin Lieske, a well known and well regarded German player, and the concert was to include a Bach piece, arranged for guitar by Wulfin himself, and one of Wulfin’s own compositions.

I was interested to hear what a 150 year old guitar would sound like.  An older classical guitar I heard many years ago was dull and lifeless, so while I was interested to see and hear La Leona, I wasn’t expecting it to sound good.  But I was so wrong.  It sounded wonderful, the bass rich and compact, the treble bright and clear, and both bass and treble notes perfectly centred.

Massimo Raccosta, who arranged the whole of the concert, is a guitarist and guitar collector with a huge collection of the best guitars from around the world, acoustic steel string, classical and electric.  He has currently nearly finished a museum to house much of his collection.

Included in Massimo’s classical collection is another Torres guitar, four years younger than La Leona.  This also sounded perfect, to my ears even just a little nicer even than La Leona.

Verona is famous for its food and wine. Massimo was an exceedingly generous host and we ate and drank wonderfully well. 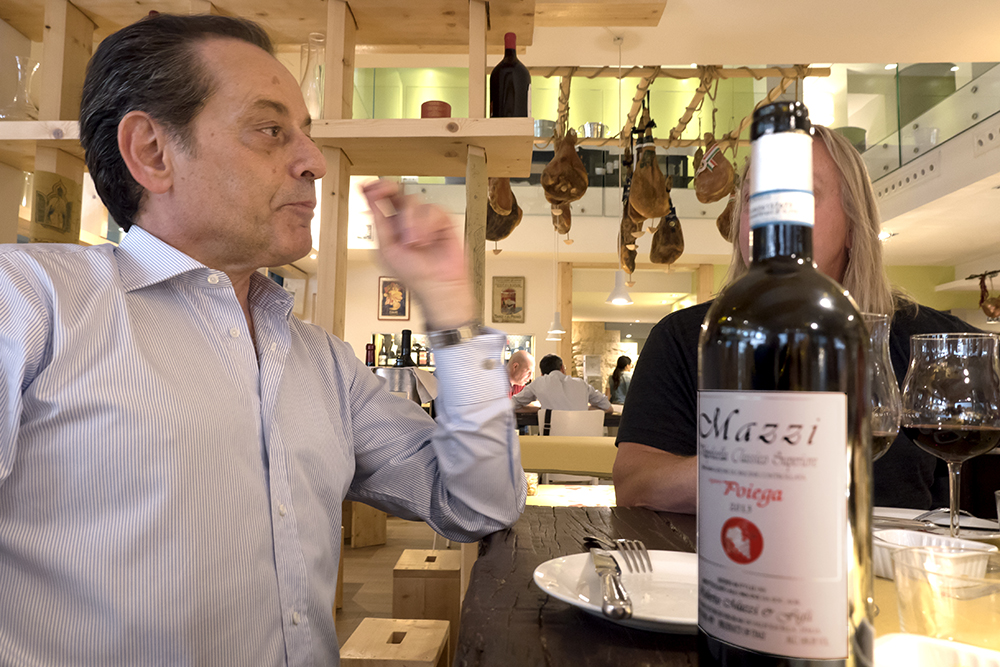 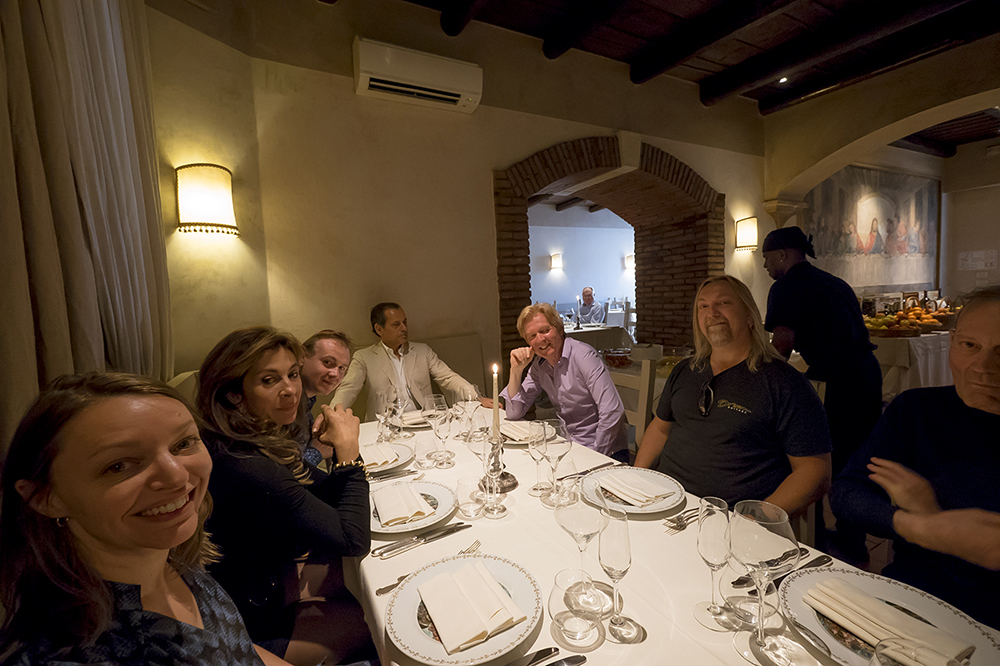 Food and drink in Verona, my daughter Becky on the far left.

Wulfin Lieske, me and Massimo.  Dr Hannen is out of picture on the right.

The concert was given in a magnificent small hall with elaborately painted walls to an invited audience of around fifty.  These included many players and several classical makers and I was able to talk to some of these afterwards.  From where I sat the acoustics were excellent; the microphone was just for recording. 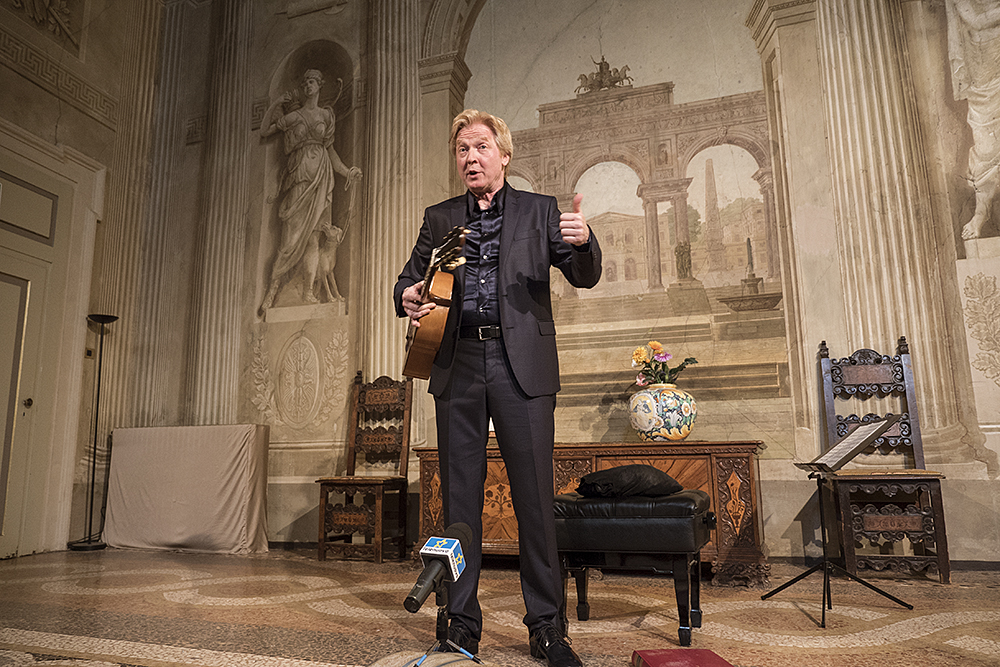 Wulfin Lieske with La Leona at the concert

Dr Erhard Hannen telling us about the repair to La Leona. 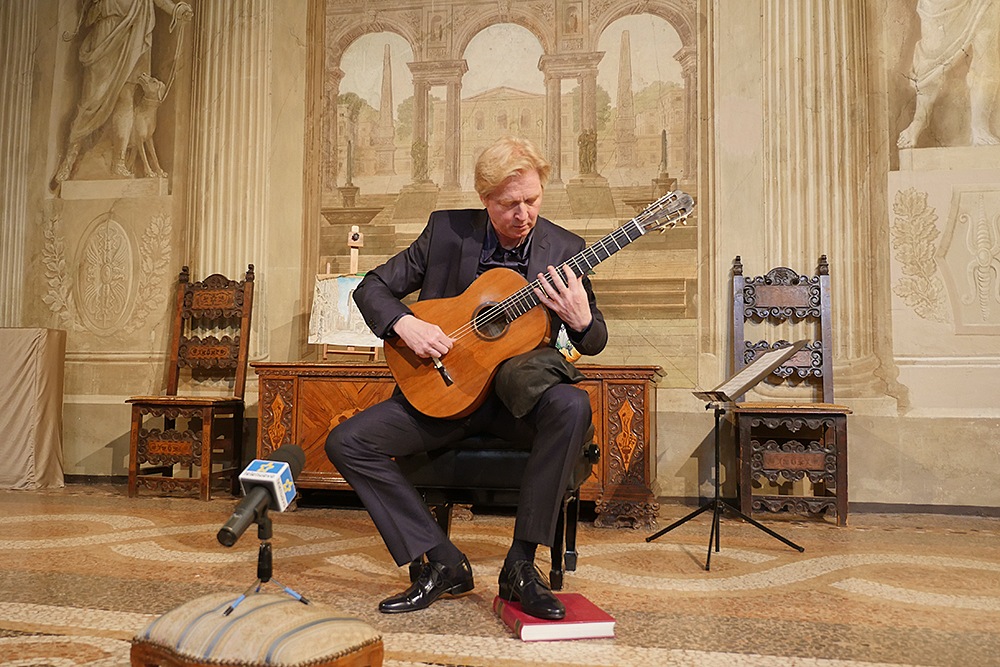 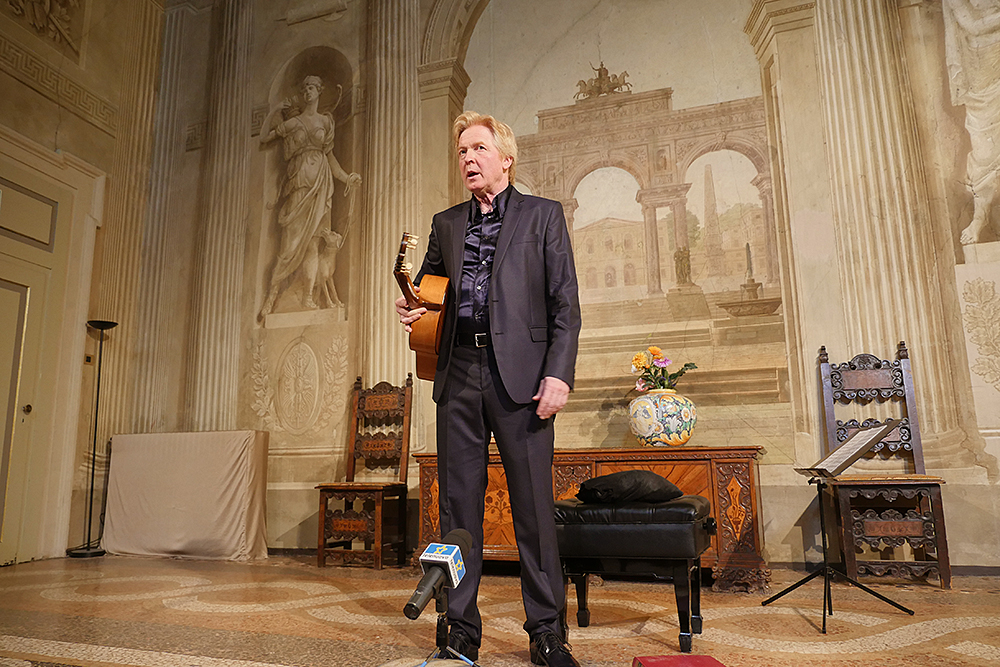 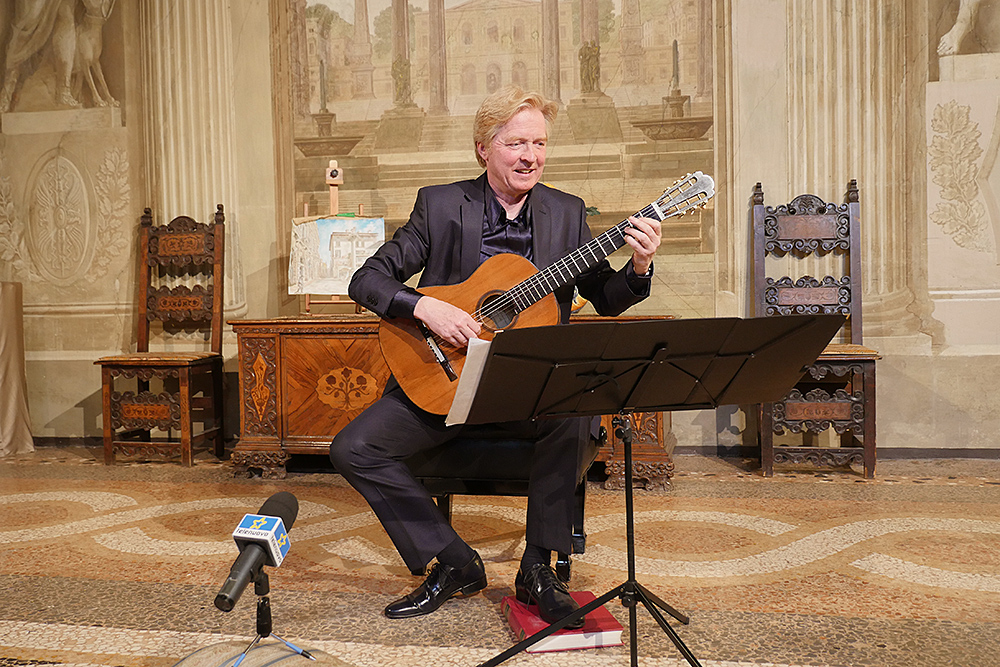 Dr Erhard Hannen gave an account to the audience of how he bought La Leona and how it was repaired.

When he tracked it down and was able to buy it, it was in poor repair with a seriously sunken soundboard.  The repairman of his choice eventually used an unconventional repair method: he suspended the guitar from the ceiling (presumably by the bridge) so that the soundboard was eventually pulled up by the weight of the guitar over a period of time.  The room in which it was suspended was also filled with vapour (I didn’t gather quite what vapour this was) which was intended to rejuvenate the wood and possibly stablise the repair.

There was also less drastic work carried out, including filling the string holes in the bridge and drilling new ones to give the desired 8 degrees break angle over the saddle.  And some of the frets were re-positioned – I think on La Leona but possibly on another old guitar we were discussing.  So many meals, so much wine, so little sleep, so much talk.

Whatever work was done on this 150 year old guitar, it sounded astonishing.  Wulfin Lieske is an excellent guitarist and he and the guitar together made wonderful music.