For various reasons I have four instruments under construction at the moment, four and five course citterns, a D version Martin Simpson model and another New World model (pictured right without neck).

The Martin Simpson D model involves changes to the standard MS body design. While the standard model has 14 frets to the body, the D version is in effect a 12 fret version with two extra frets added, to make it a 14 fret long scale guitar (see news item dated July 8 2004). So the bridge must be in the 12 fret position (closer to the tail) and the bracing is modified to suit this new bridge position. 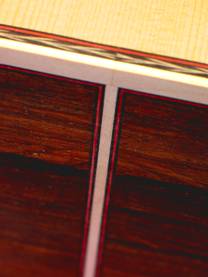 I’ve made a minor change to the NW trim. The back and side purfling is now black/red/black (matching the soundboard purfling) instead of the previous red/white/red.

I’ve sold the two New World guitars shown in earlier news items. One of them went to Mark Kolnes of Idaho, USA. He sent me this email when he received it:
“Stefan Hello, the guitar arrived. It is stunning. I’ve only had a few strumms so far but it was enough to set me blood boiling. Thank you, thank you, thank you.
ps. thank you”

I’m planning to build up to six New World guitars in any one year.[/two_third_last]

The Smith and Rogers melamine lacquer we have been using for many years has been discontinued because of changing legislation covering paints and lacquers. David is now using a new 2007 compliant lacquer and after a little while sorting out the different techniques required to apply it, is achieving excellent results.

However, after many years of using and recommending lemon oil to seal ebony fingerboards and bridges, we’ve found the new lacquer can be marked if lemon oil sits on it for any length of time. It’s necessary either to remove all traces of oil from lacquered surfaces or (more sensibly) use an alternative oil. There are several branded fingerboard oils on the market, and I shall be testing other commercial light oils.

It’s important to oil ebony fingerboards because ebony, being so non-oily in itself, can readily absorb water from the atmosphere. This will swell it, causing fret ends to contract into the side of the fingerboard. It can also change the set-up and action, because if the fingerboard expands more than the mahogany, it can curve the neck back.

Ideally the fingerboard should be oiled on a regular basis to prevent this.